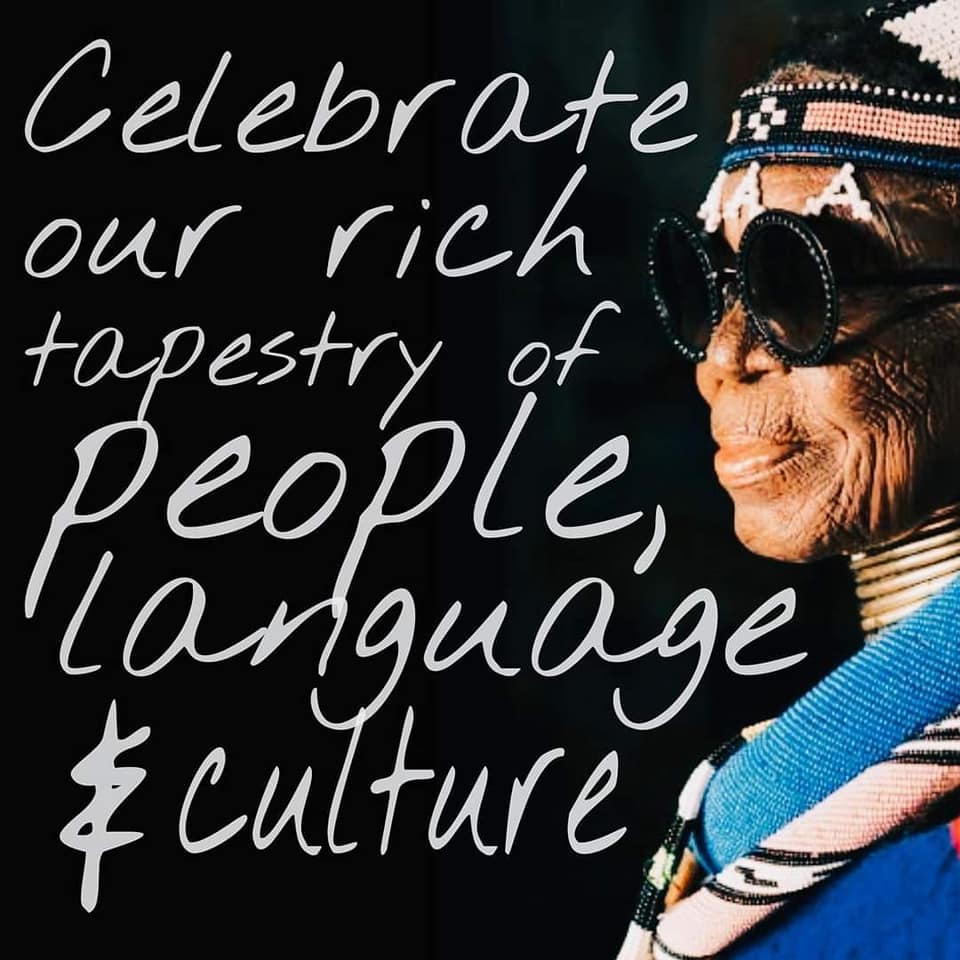 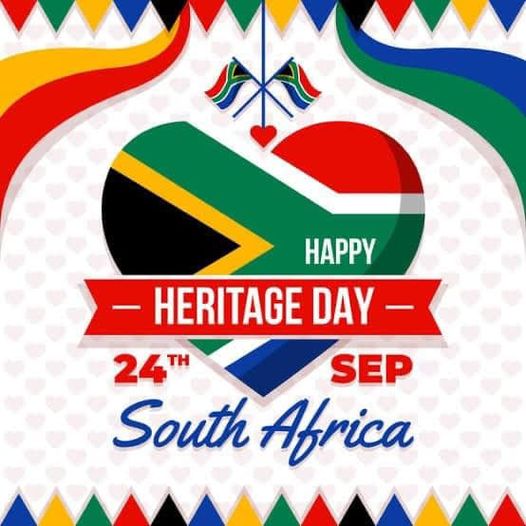 DG D9400 Dr. Stella Anyangwe and Carl
“Serve to change lives” is the clarion call that we, the CHANGE-MAKER team of Rotary leaders for 2021-22, received from our team leader, RI President Shekhar Mehta. So, on 1July 2021, we hit the ground running in District 9400, with the Change-Maker team of District Chairs, AGs, Club Officials and all Rotarians, to answer that clarion call.
Our District goals are no different from RI goals for this year: grow membership, give more to the Rotary Foundation, improve service.
The catchy phrases to remind us of these goals are:
Our District’s and my goals for the year are the following”
The RI President’s Initiatives for the year 2021-22 are the following:

Our very own IPDG, Annemarie Mostert, has been selected by President Shekhar to be the Ambassador for the Empowerment of Girls initiative for Region 28 (7 Districts) of Rotary Zone 22. Hearty congratulations to her, and we look forward to details on how our District will support her in carrying out this initiative. My wish is that all clubs use 23rd Feb 2022, the Rotary anniversary, to carry out Rotary awareness in our communities, in all ways possible. The District must showcase Rotary this year, as “Rotary Days”. We are also proud to announce that our District was selected to host one of the six Presidential conferences this Rotary Year. Maputo, Mozambique is the venue for the Presidential Conference, on 5-6 March, 2022, and whose theme is “Environment, Economy and Peace”. PDG Kobla Quashie (RC Manzini) is the Convener of that conference, for which a Local Organizing Committee is already hard at work. My visits to Clubs have started full-swing, albeit virtually, due to COVIC-19 restrictions. How we long for the time when we can once again have physical visits. Our heartfelt condolences go to Clubs and families that have lost loved ones to COVID. Stay well and safe!

We Will Make A Formidable Team Together! 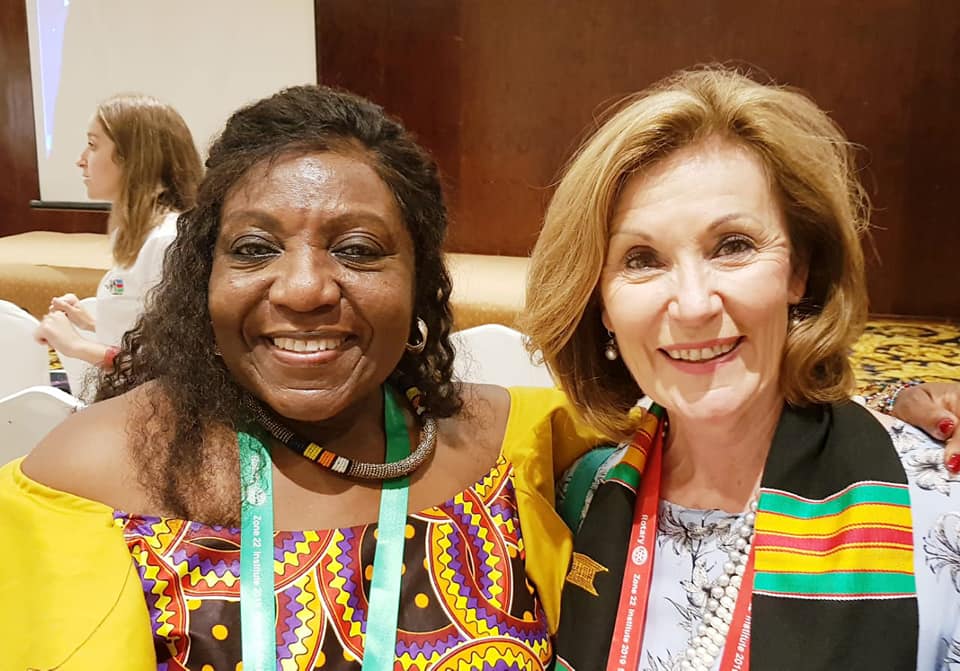 Women in Rotary is a Global Rotary Radio (GRR) programme that showcases Female Rotarians to the world.

This is an avenue for them to share their Rotary stories and much more inspiring stories.

Below is an audio recording with SG Stella Anyangwe of Rotary E55, take time and listen. 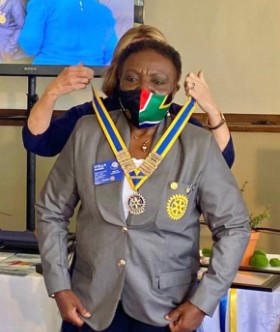 Stella Anyangwe, MD, PhD, Medical Doctor, Epidemiologist and Global Health Expert, was Honorary Professor at the School of Health Systems and Public Health, Faculty of Health Sciences, University of Pretoria, Pretoria, South Africa, from 2014-2017. Prof Anyangwe lectured on Disaster Risk Management, Neglected Tropical Diseases and Social Determinants of Health. She also supervised PhD candidates.
Prof. Anyangwe retired from the World Health Organization in April 2013, after 17 years of service to the Organization, and served as WHO  Consultant till 2016.
From 1996 till April 2013, Prof. Anyangwe served WHO in various capacities. For 13 years (1998-2011) she was WHO Country Representative in four countries in the African Region (Seychelles, Mali, Zambia and South Africa), responsible for the coordination of WHO’s technical support to those Member States. Her last assignment in WHO (January 2012 - April 2013) was as the Programme Area Coordinator for Disaster Preparedness and Response in the African Region. Before going international, Prof Anyangwe was Senior Lecturer in Epidemiology and Community Medicine in the Faculty of Medicine of the University of Yaounde, in Cameroon. Prior to obtaining her MPH (1986) and PhD (1990) degrees in Epidemiology at Tulane University, New Orleans, Prof. Anyangwe was a practicing physician (MD, 1977) and resident nephrologist in Cameroon.
Prof. Anyangwe’s main global health interests are disaster risk management, human resources for health, social determinants of health, neglected tropical diseases and geophagia.
Prof Anyangwe is continuing to serve the African continent and the world at large as pro bono member of international health NGOs. She is on the Health Programme Committee of the International Board of Amref Africa, the oldest health NGO in Africa (2015 till date). She was also Director for the African Region on the Board of Directors of the World Association of Disaster and Emergency Medicine (WADEM) 2014-2019.
Rotarian Stella Anyangwe had been a Rotarian since 1995, and is presently a member of the Rotary Club of Pretoria West, District 9400 Region 5, the club she joined in October 2007. She’s a two-time Past President of the club (2014/15; 2016/17). In 1998, she became a Life Member of RFFA (Rotarians for Fighting AIDS), now called RFHA (Rotarians for Family Health and AIDS prevention), a Rotary Action Group. She became a Paul Harris Fellow in 2001, contributing towards education in honour of her mother, a devoted early child educator who died in 2000. Rotarian Stella has been a Rotary Club member in Zambia, Congo, Nigeria, Seychelles, Mali and South Africa.
In Rotary, her passion has been Membership, especially of women into Rotary, and she has headed the Membership Committee in all the clubs in which she has been a member. She also served in the District 9400 Membership Committee in 2016/17.   She is presently Assistant Governor (AG) and DG Nominee (DGN).
Rotarian Stella is married to Prof Carl Anyangwe, an International Human Rights Lawyer and retired Rector of Walter Sisulu University, Butterworth Campus. They have two adult married children living in Europe. 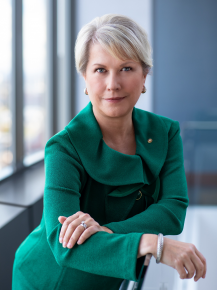 RI President Jennifer Jones imagines a Rotary where members act to make their dreams become reality and they make the most of their club experiences. She urges members to engage more with each other and use these connections to build partnerships that change the world. #ImagineRotary 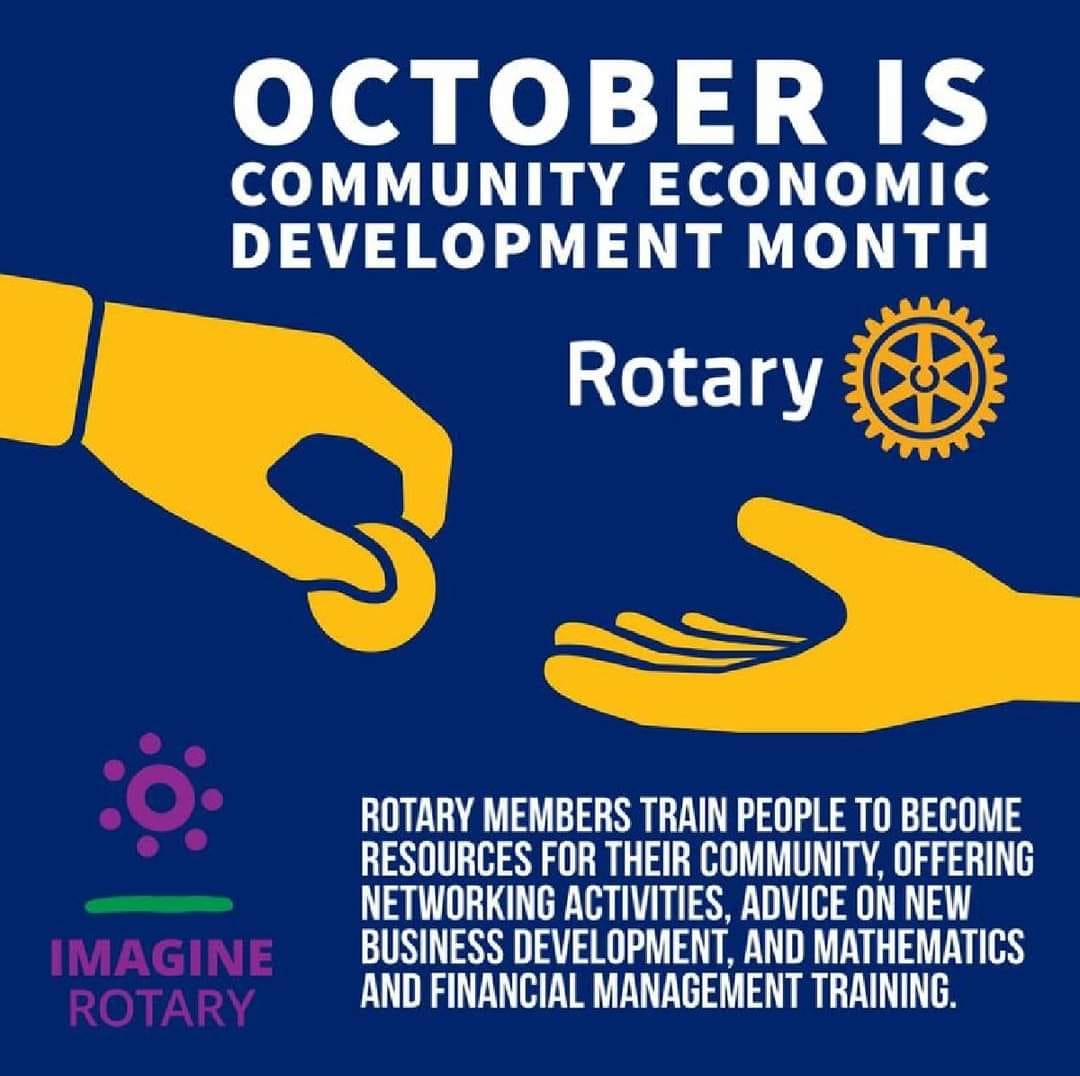 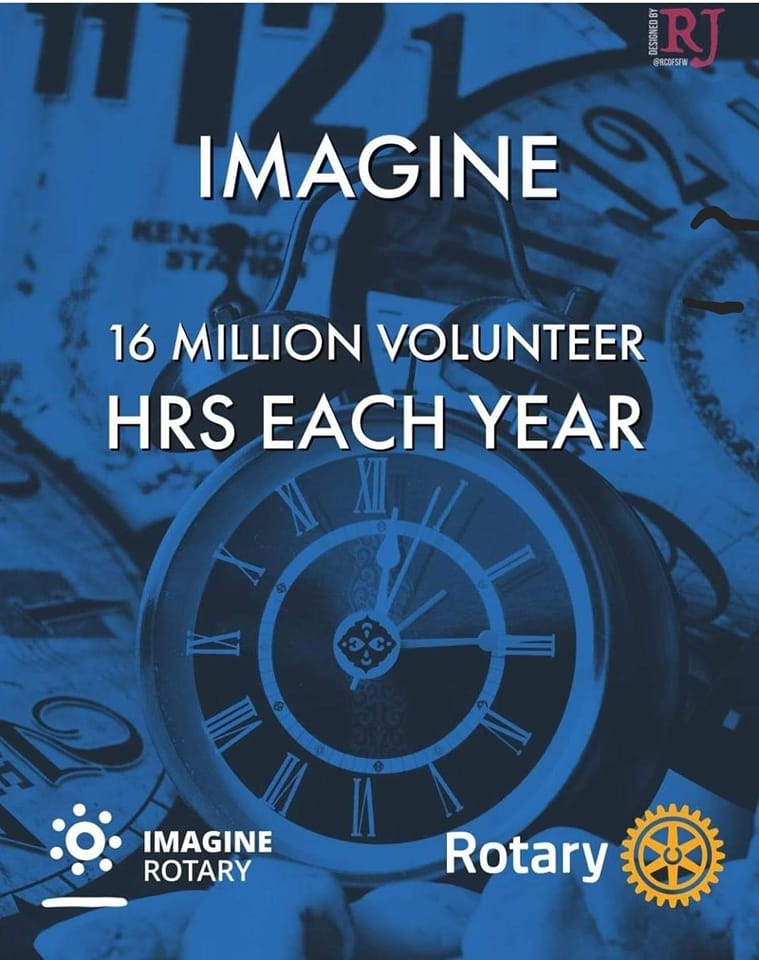 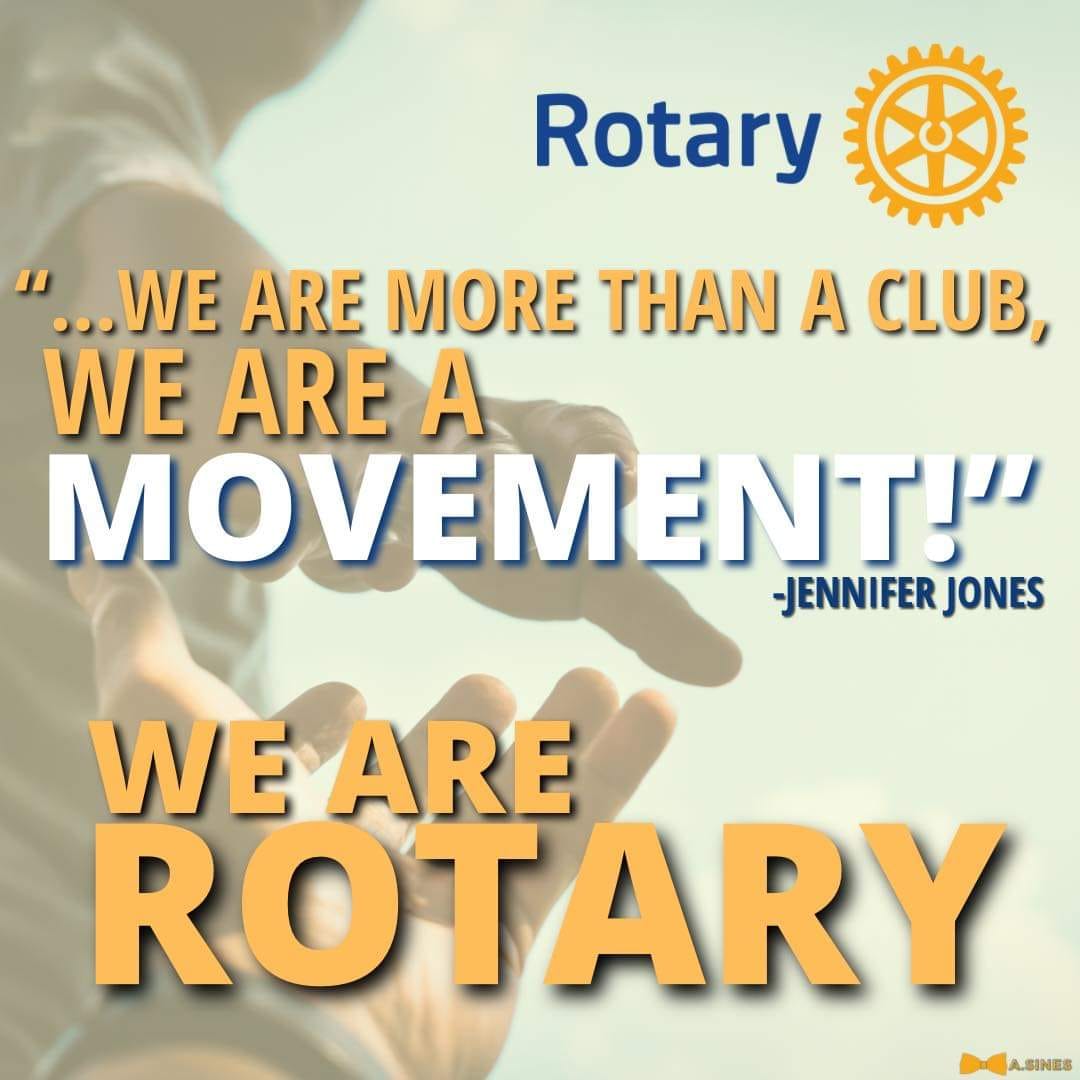